February 20, 2010
1. Double-click to edit a wave
It is simple, just double-click on the content area where you are reading the wave. It will show two options - reply and edit. Select "edit" and you are done, it will open-up the editor. This is much faster than selecting “Edit this wave” from the menu at top-right.

2. Read-only wave
When you make a wave public, by adding public@a.gwave.com, you now get an option whether you want to give read only access to the new user or full editable access.

Read-only participants can only view the wave and look at the history. But they can neither add anybody to the wave, nor can they make any modification to the wave.

3. Add Google Groups to wave
You can add a Google Group to a wave, set permissions and then view and edit waves with that group. This is a very useful feature for a person like me who uses wave for group collaboration half the times. In one of my astrology forum, I used Google Wiki for writing an ebook with my forum members and Google Wave is even better. 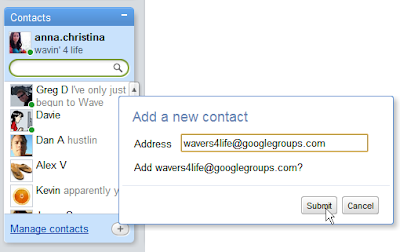 4. Revert to older version
Wave version control got better after introducing option for reverting to older version. You now get "Restore" option during playback (while checking the history)

Love you Google and Google Wave. Looking forward to the invitation for Google Wave on my Google Apps.

Important Note for New User:
While using Google Wave for any serious work, always keep in mind that you can not remove a user from the wave. Which means, that other user, even if accidently added to the wave, has as much control as you do. You do not own the wave created by you. So, be careful for using Wave for any official/ confidential kind of work that you do not want to share with the world.
(As on 22nd April 2010, now you can remove a user from the wave)

Popular posts from this blog

Today I was searching for advertisement rates of online ads. I was primarily interested in some of the big portal names like yahoo, indiatimes, and rediff etc. It took quite a while to come up with the search results having all these figures. I found two articles having some information and thought sharing with you - Business World Exchange4media Exchange4media article was written in 2004, so slightly outdated. Business World article is of year 2007 and gives sufficiently latest information. Here is the summary from the Business World article -
Read more

Yesterday I noticed that Google External Keyword Suggestion Tool has started showing the actual search number in present month as well as the average that Google has with it. I wonder is there any reason for me to use free keyword suggestion tool by Wordtracker now? The quality of data with Google is certainly better and more up to the date than WordTracker. Because Google is the most used search engine, it's data make more sense to me than WordTracker or Overture.Here is the screenshots that made me happy and I hope it will make you happy too - Check out Google External Keyword Suggestion Tool . I hope new features will not disappear like some of the stats features from Google Trends disappeared.
Read more

Knol: About.com and NOT the Wikipedia Killer

July 25, 2008
Recently Google announced the public availability of Knol , after a test run of around 7-8 months. Most of the people see it as Wikipedia killer. Though there are similarity between Knol and Wikipedia, there are noticeable difference as follows - The first difference is that Knol is all about articles and not creating encyclopedia. Wikipedia is more subject/topic centered whereas Knol is more article/ author centered. Author can still own the copyright of the article and decide whether s/he wants contribution from others or not. He has also few license options available to choose from. Option for selecting license is not possible with Wikipedia. One major difference that I see it the option for monetization. I had written one post previously that Twitter and FriendFeed should allow monetization, so why not Wikipedia? Google approach definitely encourages sharing and collaboration by adding monetization aspect to the contribution. All articles in Knol is having nofollow attribute, s
Read more